A giant salamander that once lived in the London Zoo and was later on display at the Natural History Museum represents a new species that may be the world’s largest amphibian.

This finding is part of a larger discovery about the diversity of Chinese giant salamanders, separating what was once thought of as a single species into three distinct species. A study detailing the new species was published Monday in the journal Ecology and Evolution.
Giant salamanders once lived across central, southern and eastern China. The species Andrias davidianus, known as the Chinese giant salamander, reach a length of 3.7 feet and 110 pounds. Now, the wild populations are critically depleted. Learning more about them could help to save the salamanders, the researchers said.
Researchers studied 17 specimens from museums and tissue samples from wild salamanders. That’s when they met Andria sligoi, the South China giant salamander, for the first time — even though the specimen had resided in a museum for 74 years.
During the 1920s and ’30s, when the salamander was still alive, it lived at the Zoological Society of London’s Zoo for 20 years. At the time, it was deemed an unusual salamander, but the idea was dropped.
The new study confirms it’s different from other salamanders and represents the world’s biggest amphibian that can grow to nearly six feet in length. That makes it larger than around 8,000 amphibians on the planet today. 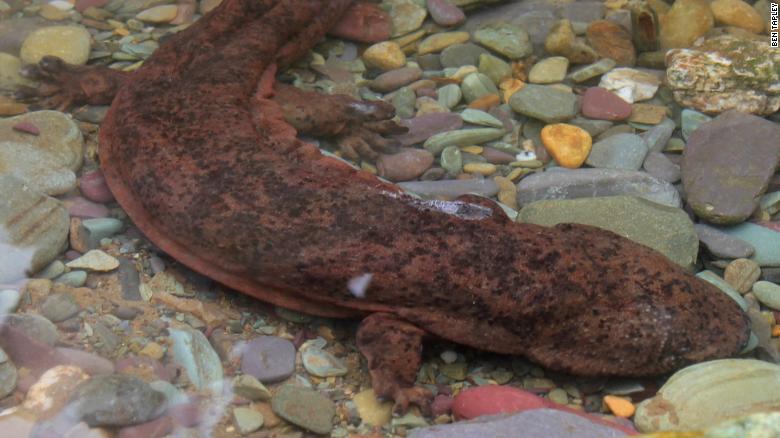 Their research also divides the single species of giant salamanders into three: davidianus, sligoi and a third species that hasn’t been named yet. The third species is known only from tissue samples.
Each species was found to be unique to a different river system or mountain range in China and they were very different from each other genetically.
“Our analysis reveals that Chinese giant salamander species diverged between 3.1 and 2.4 million years ago,” said Samuel Turvey, lead study author at the Zoological Society of London’s Institute of Zoology. “These dates correspond to a period of mountain formation in China as the Tibetan Plateau rose rapidly, which could have isolated giant salamander populations and led to the evolution of distinct species in different landscapes.”
The North Atlantic right whale will soon be extinct unless something is done to save it, researchers warn
Historically, giant salamanders were used for medicinal and food purposes in southern China, according to the study. The species was exploited when populations that used the giant salamander moved, creating a trade in the luxury food market. The demand led to a massive farming industry as well.
“The decline in wild Chinese giant salamander numbers has been catastrophic, mainly due to recent overexploitation for food,” Turvey said. “We hope that this new understanding of their species diversity has arrived in time to support their successful conservation, but urgent measures are required to protect any viable giant salamander populations that might remain.”
The Chinese giant salamander.
The Chinese giant salamander has been listed as Critically Endangered by the International Union for Conservation of Nature. Farming and overexploitation have resulted in the salamanders being found at only four of 97 sites across China. The salamanders are often moved to stock farms as well as for conservation reasons.
There are 2 northern white rhinos left worldwide. Scientists created embryos to save the animal from extinction
“Conservation plans must now be updated to recognize the existence of multiple giant salamander species, and movement of these animals should be prohibited to reduce the risk of disease transfer, competition and genetic hybridization,” Turvey said.
The London Zoo is home to four giant salamanders that were seized after someone tried to import them illegally in 2016.
“These findings come at a time where urgent interventions are required to save Chinese giant salamanders in the wild,” said Melissa Marr, study author and PhD researcher at the Natural History Museum in London. “Our results indicate that tailored conservation measures should be put in place that preserve the genetic integrity of each distinct species.”
SOURCE LINK
Facebook Comments
Show More
Share
Facebook Twitter LinkedIn Tumblr Pinterest Reddit VKontakte Odnoklassniki Pocket Share via Email Print

White House tells Lewandowski not to answer questions and asserts immunity for Dearborn and Porter.