President Biden’s unraveling of the Trump administration’s Middle East policy already is well underway, but a prominent elder statesmen is advising him to uphold his predecessor’s “brilliant” realignment of the region’s politics.

“I think that one of the great successes of the previous administration was that they had lined up, that they had achieved two things in the Middle East,” Kissinger said Tuesday during the first seminar of a new monthly series from the Richard Nixon Foundation focused on national security and foreign policy.

“One, to separate the Palestinian problem from all of the other problems so that it did not become a veto over everything else — and secondly, of lining up the Sunni states in actual or potential combination against the Shiite states, which is Iran, that was developing a capacity to threaten them,” he said. “I think that this was a brilliant concept. We were just at the beginning of it.” 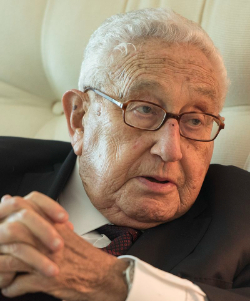 Calling the Biden administration “the most ideologically rigid and radical administration in U.S. history,” the Israel-based foreign affairs specialist said the Indonesia deal would “pay a huge dividend to the US in its burgeoning cold war with China.”

“An expanded strategic and economic partnership with the archipelago and ASEAN member would be a setback for China’s efforts to dominate the South China Sea, particularly with Indonesia playing a role in an Islamic-Israeli alliance led by the US,” she wrote.

The senior official said, “We got the ball on Indonesia and Israel to the [one]-yard line.”

Unfortunately, Glick wrote, “the Biden administration has dropped the ball on the ground and walked off the field.”

‘The risk of losing the two achievements’

At the seminar Tuesday, Kissinger said the Biden administration “should not give up the pressures that exist on Iran until we know where they are heading.”

“If we break out the Iranian issue from the overall Middle Eastern issue, we run the risk of losing the two achievements, namely of separating the Palestinian issue, which removes it as a veto over everything else, and the Sunni cooperation with Israel, which is unique in its openness,” he said.

Amid strong bipartisan opposition from Congress, the White House has said it still hopes to reengage in nuclear talks with Iran in the coming months.

Content created by the WND News Center is available for re-publication without charge to any eligible news publisher that can provide a large audience. For licensing opportunities of our original content, please contact [email protected].

Schools committed to 'theistic order' are key to renewal

Coronavirus daily news updates, April 11: What to know today about COVID-19 in the Seattle area, Washington state and the world