World Basketball governing body, Federation of International Basketball Association, FIBA has rejected the ongoing Nigeria Basketball League Super 8 organised by the Ministry of youth and sports even as it has set aside November 18 to take a decision to ban Nigeria from international basketball competitions, www.beatchoiceaports.com.ng can report.

FIBA’s actions emanated from the ongoing crisis rocking the Nigeria Basketball Federation, NBBF following the expiration of the tenure of the former board led by Musa Kida

NBBF was thrown into crisis following the constitution of a caretaker committee to oversee the affairs of the federation in May this year. However, crisis had engulfed the federation culminating in basketball players accusing the former president of the federation, Musa Kida of high-handedness and failure to pay them their entitlements, the committee was disbanded in October.

The election into the board earlier slated to hold on October 30, 2021 was suspended indefinitely by the sports ministry.

However, FIBA has written to the NBBF through its former President, Musa Kida in a letter dated November 10, 2021 threatening to ban Nigeria from basketball competitions internationally setting aside November 18 as the decision day

The letter signed by FIBA president, Hamare Niang to the NBBF in which Nigeria Olympic Committee, NOC was copied also noted that the global basketball body would not recognise any competition organised by a third party other than the NBBF.

In the letter, FIBA noted that the Ministry of Sports had on three different occasions communicated with them informing them of the postponement of the NBBF elections, organisation of NBBF Premier League and making arrangements on preparing D’Tigers for the FIBA World Cup qualifier in November. FIBA said the actions taken by the Ministry of Sports are against Article 9.7 of its General Statute. 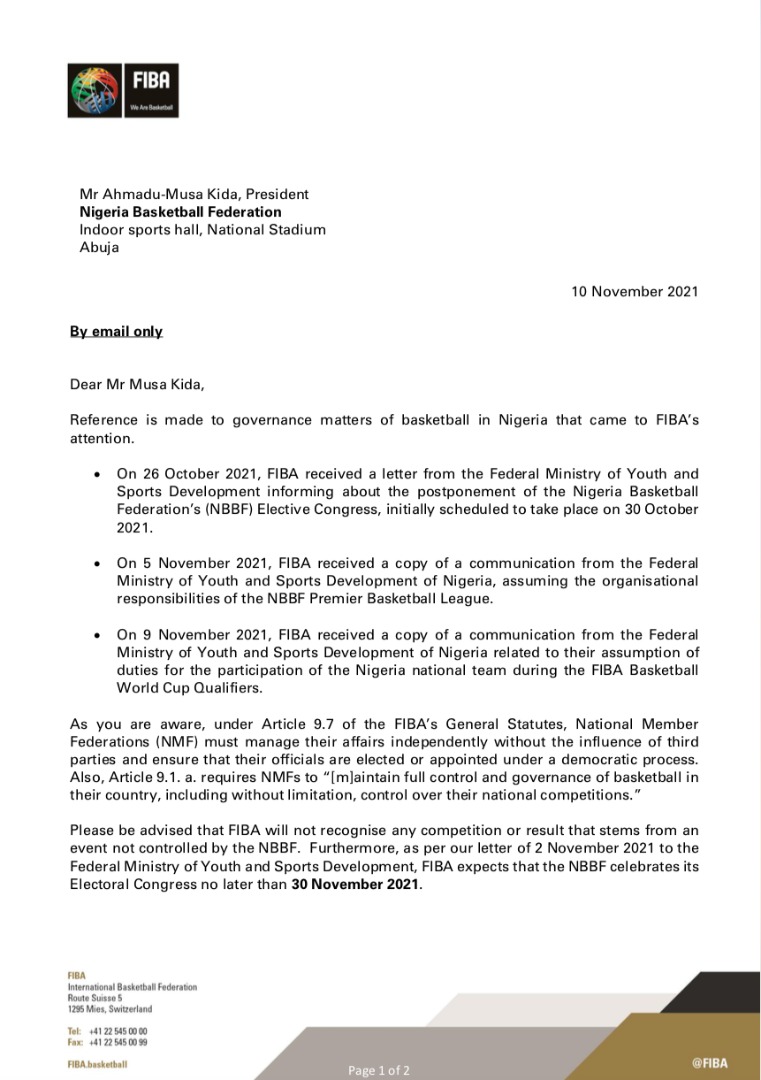 The letter stressed that FIBA will not recognise the outcome of the ongoing NBBF League aimed at providing champions that will represent Nigeria at the Basketball African League (BAL).

FIBA directed that the protracted elections into the NBBF board should be held on or before November 30, 2021.

The letter, reading in parts, says “On 20 October, 2021 FIBA received a letter from the Ministry of Youth and Sports

Development informing about the postponement of NBBF elections initially scheduled to take place in 30 October, 2021.

”On November 5, 2021 FIBA received a copy of communication from the Federal Ministry of Youth and Sports Development assuming the organizational responsibilities of the NBBF Premier League.

“As you’re aware, under Article 9.7 of the FIBA General Statute, National Member Federation (NMF) must manage their affairs independently without the influence of third parties and ensure that their officials are elected or appointed under a democratic process . Also Article 9.1, NMF must maintain full control and governance of basketball in their country without limitation,” it said.

The letter further warned that, “Please, be advised that FIBA will not recognize any competition or result stem from an event not controlled by the NBBF. Furthermore, our letter to the Ministry of Sports expects that the NBBF celebrates its Electoral Congress no later than November 30.

“The current situation will be brought to the attention of FIBA Central Board in its next meeting on November 18, 2021 to determine any other cause of action as per FIBA General Statute and Internal Regulations.”

However, the sports ministry showed no regard to the letter as it commenced the Super 7 Basketball League in Abuja on November 12, two days after recieveing FIBA’s correspondence.

Danchenko indictment: How non-source for dossier was 'framed'